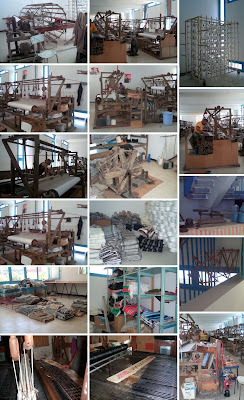 I have a special interest in weaving, as it is what I studied during my first two years in Paris.
When traveling in Tunisia, we happened to walk past several weaver ateliers which I was very happy to visit!
The first one was a cooperative called Al Faouz, not far from the famous tourist destination Hammamet. They were very friendly and welcoming and explained us that most of them have been working there for over 30 years. Some of them were really very old, but still very alert. They work avery day but Friday, which is the "prayer day" for Muslims, and for very long hours as it is really labour intensive work. They do everything by hand, from spinning the wool to set up the loom to the actual weaving. Sadly, as not many young people are interested in that profession, they are less and less numerous and therefore it is more difficult for them to keep up with the amount of work they get. Apparently, they don't have time to do as many things as before, and mainly produce the fabric used for the traditional coat "burnous".
They work on big wooden loops that are activated by pedals, so their feet are in very bad condition. It was very impressive to see how fast they work and how quick are their movements!
There's a small shop in the basement where they sell the product of their work, there was still some nice cushion covers and cute little carpets.
Another wokshop we visited was in Mahdia, more in the south of the country. It is a town famous for its silk weavers, where it is said to be a loom in every home...
And indeed, in the old Medina, there were weavers in every corner. One was particularly nice and showed us his little workshop and even demonstrated how he was doing. He was in the middle of  weaving a traditional wedding fabric. He was selling some beautiful silk scarves made by him. One silk scarf like that takes him about a day to weave and it is so much more precious than those bought in shops!

Posted by Mademoiselle Bagatelles at 21:59 2 comments:

A good dose of sea, sun and farniente! 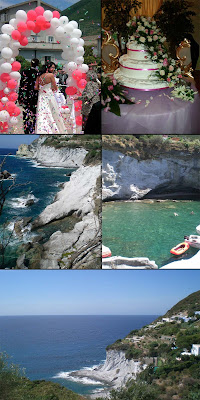 I know I said I was going away only for a long weekend, and it is now a long time since I haven't written anything...
My weekend in Italy was very nice, it was warm and sunny, the wedding went quite well, and we even escaped for a while on the beautiful island of Ponza...
When I came back, I thought I would have time to post some photos but I had a lot of orders to work on in just a few days. For we went to Tunisia just a week later!
It was very long time since I had been there, and I was very happy to go back. As some of you may know, half of my family is from there and I spent some time there as a child.


As always, light is amazing there, so bright, and it is also accentuated by the whiteness of the walls which is beautiful contrasting with the traditional blue windows... The sea was so nice, so clear, so green, mmm...
I really like the architecture too, it is all roundness and sensuality. And all those superb patterns really remind me of textiles.
Well, well, it was a really nice break. It was good catching up on things I had been missing... 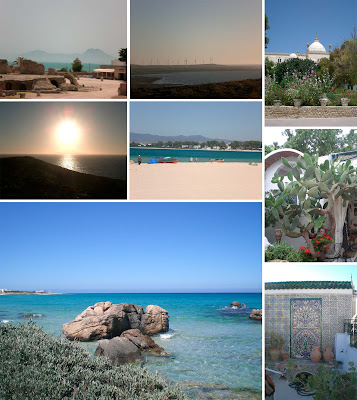 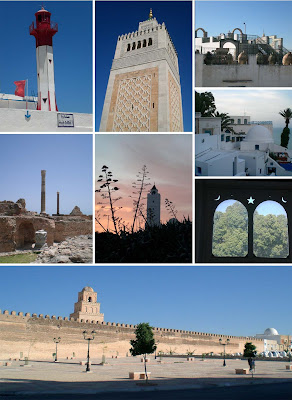 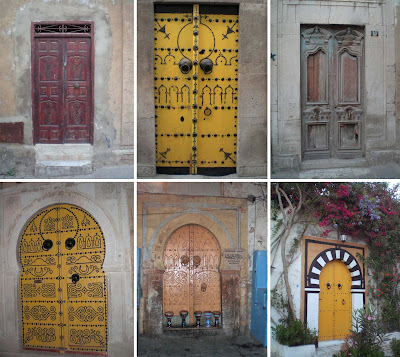 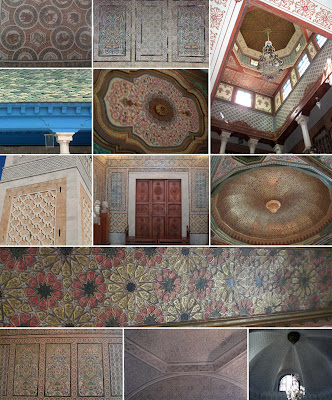 Posted by Mademoiselle Bagatelles at 22:31 3 comments:

Mademoiselle Bagatelles
Hello! I’m a Fashion designer/pattern cutter based in Paris, France. As far as I remember, I have always been drawing and playing around with fabrics and making things… This led me to study Textile and Fashion design in Paris and London. My love for accessories and beautiful textiles is at the origin of Mademoiselle Bagatelles, my collection of accessories. This blog is a way to document my creative process, from inspirations to making...

This is a Flickr badge showing public photos and videos from mademoiselle bagatelle. Make your own badge here.